Our Congregation Beth Shalom Men’s Club has consistently been recognized as one of the top clubs within the Federation of Jewish Men’s Clubs. This reputation was reinforced once again at this year’s FJMC biannual convention, which was held virtually from June 6th – 13th due to COVID 19.

During every convention, Men’s Clubs all over the country submit applications for awards based on their full year programs and activities. This year’s awards were based on 20 categories. Our CBS Men’s Club won the Gold Award in four categories including Health and Wellness, Programming for Young Men 39 and Younger, Best Overall Activities, and Club Administration.

For the first time this year, a new award category was created to recognize the clubs receiving the most points from all of the awards they received. Points were allocated based on the number of Gold (3), Silver (2), and Bronze (1) awards each club received. Our four Gold Awards yielded a total of 12 points, the most of any club in the country, for which we were awarded the first Gold Award for Best Overall Programs. Here’s a video of the award presentations. These awards were memorialized on this plaque, which will hang proudly alongside our other FJMC Torch Awards in Rosner Hall. 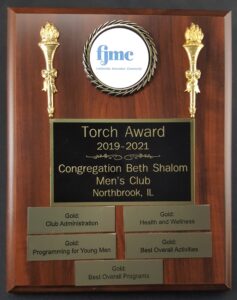