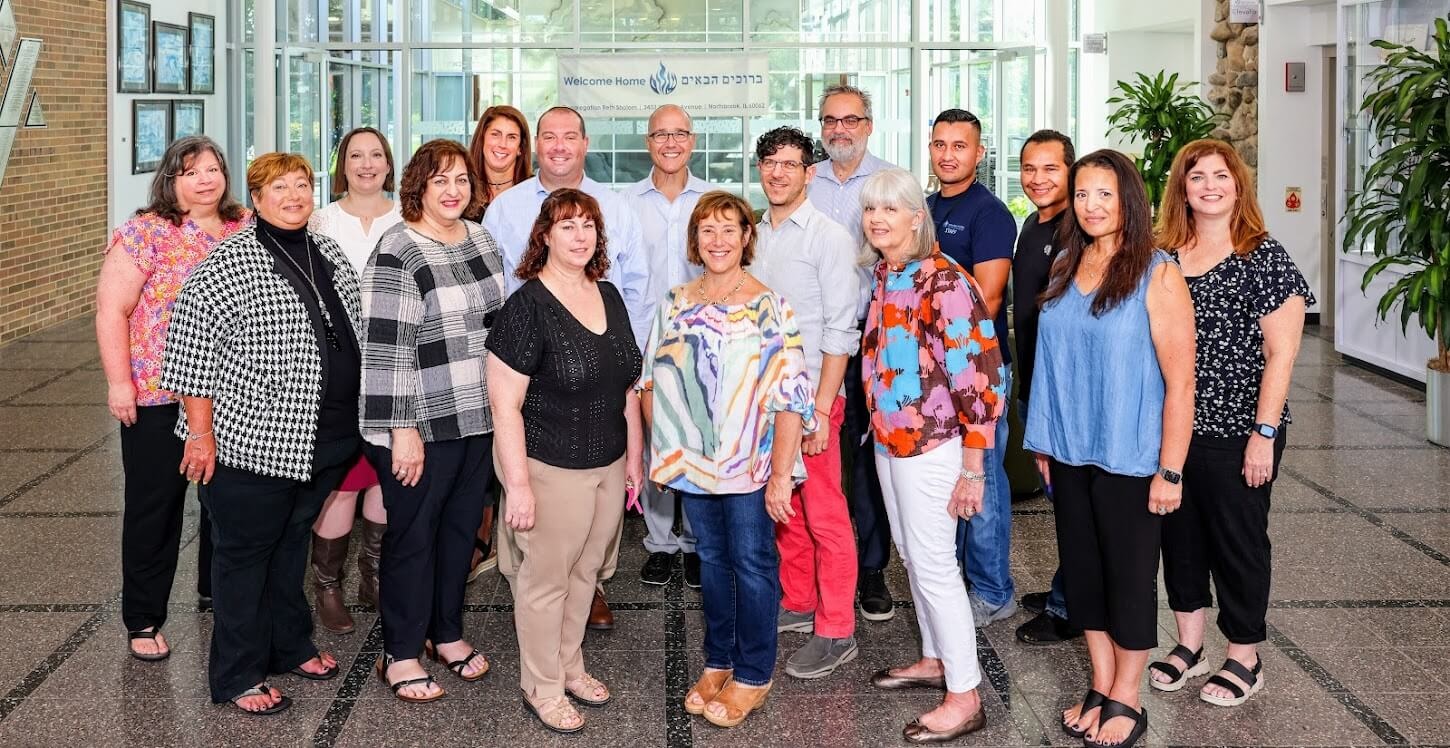 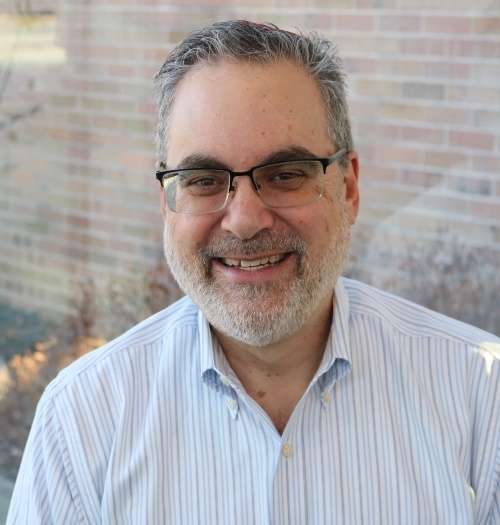 Michael Garlin was the Executive Director from 2014-2020 and has recently returned to this role in December of 2021.

Michael was originally from Morton Grove, moved to Plantation, Florida as a child and back to the Chicago area in the early 90’s. Michael graduated from Arizona State University with a Bachelor of Science in Urban Recreation, received his Master Degree from Nova University in Human Services and received his CPCC as a life coach in 2008 from the Coaches Training Institute.

Michael’s career has been in the Jewish Community of Chicago. Over the past 30 years, Michael has worked for the JCC’s of Chicago, Jewish Council for Youth Services, Temple Jeremiah, AIPAC and recently The ARK. Michael is a member of NAASE (North American Association of Synagogue Administrators) and a member and past president of CASA (Chicago Association of Synagogue Administrators).

Michael resides in Northbrook with his wife Mindy. Michael and Mindy have two children, Marisa, a recent graduate of Michigan State University and Bradley along with his wife Gemma, who all reside in Chicago. 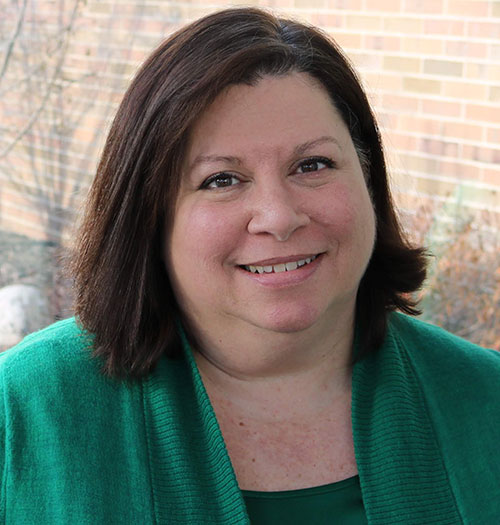 Director of Jewish Life and Learning

After graduation, Leann put in 3 years with the United Synagogue of Conservative Judaism as Regional Youth Director of Seaboard Region and then Hagalil Region. It was at International USY Convention in 1988, that Leann was leading a delegation of teens from New Jersey to Chicago, when she met the CHUSY Region Fieldworker, Michael Blue, and the rest is history.

Upon moving to the Chicago area in 1989, Leann worked as Youth Director for North Suburban Synagogue Beth El in Highland Park for six years. In 1995, Leann joined the staff of Congregation Beth Shalom as Youth Director, leading the chapter during many award winning years.

In 2001, while still Youth Director, Leann began focusing on Adult Education and family programming, and in 2002, she took on her current role of Director of Jewish Life and Learning at Congregation Beth Shalom. Some of the programs she has developed are the CBS Shabbaton, Lamazel!, Megillah Mania, Making Sukkot Simple, Ideas Cafe and CBS University. 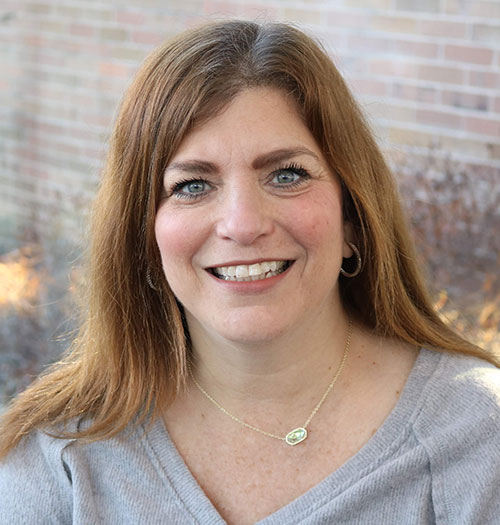 Deanne began working for Congregation Beth Shalom in 2011 as the Programming and Communications Assistant. In her role in communications, she managed the website as well as prepared the weekly e-newsletters, The Shalom Byte and The Shabbat Byte. She also helped in many other areas of CBS communications. In Deanne’s other role with programming, she assisted Leann, the Director of Jewish Life and Learning, in all areas of coordinating classes and programs for CBS University and Adult Education. On March 1, 2017, Deanne began in her role as CBS Communications Manager. She is responsible for all areas of communication, social media, the Congregation Beth Shalom website and bulletin.

Deanne has a Master’s of Science in Public Service Management from DePaul University. She sits on the Board of Directors of Olin-Sang-Ruby Union Institute where she was once employed and where her children have all attended overnight camp.

She and her husband Jeff, an attorney, love to travel with and without their three daughters. Deanne also loves to read, shop, laugh with her family and friends and play with her dog! 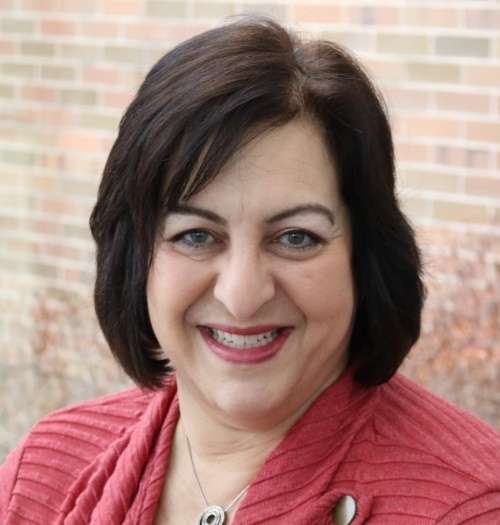 Susan Karlinsky serves Congregation Beth Shalom as its Controller. Susan joined our staff in 2010 and works closely with the clergy, staff, and the Executive officers of the Board of Trustees. She is responsible for day-to-day accounting, member billing, budgeting, and financial reporting.  Susan, with the dedicated support and leadership of the Financial Committee and Endowment Board, manages all of the donation funds and endowments at Congregation Beth Shalom.

You’ll likely find Susan greeting our members at the door for programs, special events and holiday celebrations at CBS. She works behind the scenes on many committees including HUGS and Social Action.

Susan grew up in Skokie, and earned her accounting degree at Bradley University. Before she joined CBS, Susan managed a private family foundation for over 13 years following her work with the family’s investment office. For many years, she served a variety of small businesses and individuals as a CPA, advisor and tax preparer. She lives in Vernon Hills with her husband Sheldon (also a CPA). Their twin sons, Marc (married to Carol) and Aaron (married to Randi) live in the Chicago area. Susan and Shelly cherish their role as grandparents of two beautiful girls! 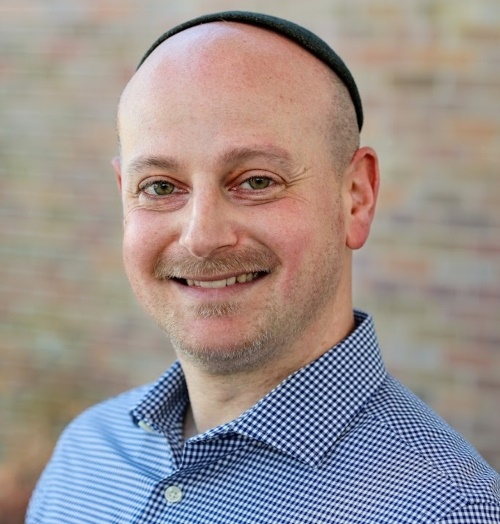 Michael joined the staff of Congregation Beth Shalom as the Director of Youth, Family & Young Adult Engagement just before Sukkot 5783 (2022).

Michael has worked in Jewish education and programming for more than 15 years. Most recently he was the Membership and Financial Administrator at Congregation Beth Am (Buffalo Grove), where he also taught Hebrew School and led the Youth Group. Prior to that, he was the Director of Youth Engagement and Associate Executive Director at Makom Solel Lakeside (Highland Park).

His education includes a Master’s degree in Jewish Studies, graduate coursework in Elementary Education, and an undergraduate degree in Criminal Justice. Michael also completed the Certificate in Jewish Leadership program through Spertus Institute.

As a Jewish youth professional, Michael enjoys bringing children of all ages together for exciting events, creating community, and offering an inclusive safe space for kids to feel at home.

He lives in Buffalo Grove with his two young children, supportive wife, and a rescue dog. When not hanging out in the Gloss Youth Lounge at CBS, he enjoys spending time with family, watching soccer, listening to podcasts, and binging the latest series on Netflix. Michael also serves as the Treasurer on the PTO Board at his children’s school. Next time you’re at CBS, don’t forget to stop by the Gloss to say hi and play a quick game of foosball! 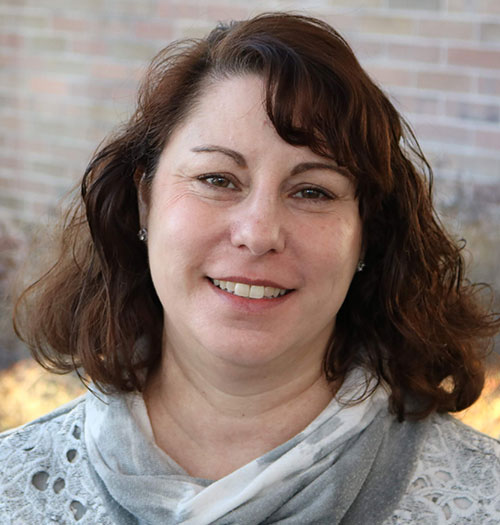 Stacy Ybarra was born in Highland Park but at the age of five moved to Tucson, Arizona where she spent her childhood.  Stacy graduated from Arizona State University with a Bachelor in Social Work and a Bachelor of Arts in Spanish with a Latin American Emphasis.  She received her Master in Social Work from Boston University where in addition to individual, family and group clinical work her degree focused on management, program development and community organizing.  Her social work career began with working for Early Head Start and then moving into work with teen parents and at-risk teens.

Stacy’s Mom is an educator and began working in the Jewish community when Stacy was nine.  Stacy grew up helping her Mom and began teaching in the Jewish Community at age 15.  Since then, Stacy has taught in synagogues and Jewish camps in three states in Reform, Conservative and Chabad communities.  Stacy has taught every grade from Mommy & Me through adult education; there is not a grade she has missed.  Stacy has been on a curriculum committee and served on a synagogue board.  She has also been a Religious School Director for a Conservative synagogue in Arizona.

Stacy moved to Deerfield in September of 2016 where she currently lives with her two sons.  When she is not working she is volunteering at DHS, cooking, reading or wandering through farmers markets and art fairs. 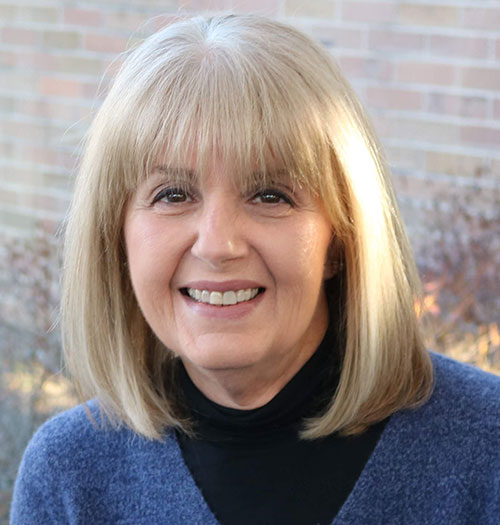 Maria has been with CBS since September, 2001.  She manages the office as well as catering, holiday Kiddushim and the kitchen. Additional responsibilities include overseeing donation opportunities (memorial plaques, leaves, bricks), various High Holiday duties, ordering office supplies and paper goods, and day to day happenings at the synagogue.

Maria lives in Glenview. She enjoys playing with her dog, Bailey, going to dinner, the movies, travelling and spending time with her family and friends. 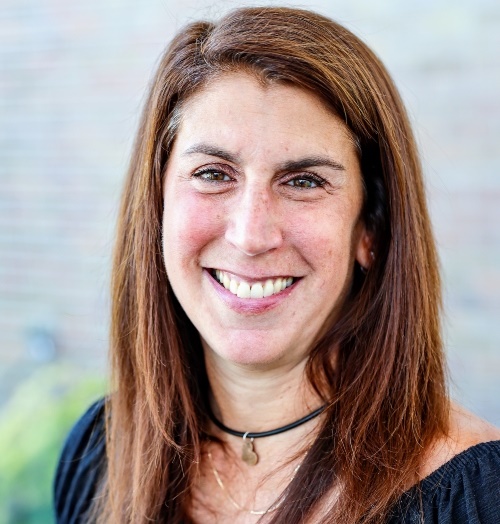 Mara recently started at Beth Shalom as an administrative assistant and is loving meeting all the CBS members!

Mara grew up in Skokie and attended Niles North High School. Mara then attended The University of Kansas and then graduated from Northeastern Illinois University with a Bachelor of Arts in Recreational Studies.

Mara spent over 25 years working at JCC Chicago beginning her career at Camp Chi, where all three of her children attended, as well. She went on to become the Day Camp Director at the Mayer Kaplan JCC Day Camp as well as Apachi Village. 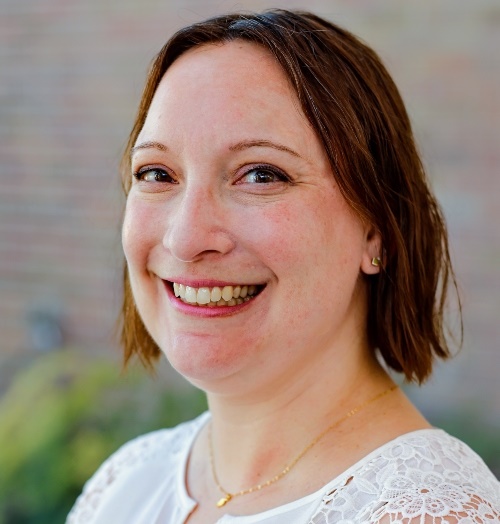 Pamela (she/her) grew up in Ontario, Canada and has lived in the United States since college.  She graduated from Calvin University with a degree in Biblical Theology with an emphasis in Torah studies.  She received a Master of Divinity from Western Theological Seminary where she studied the Tanakh with a focus on social justice, inclusivity, and spiritual formation.

Pamela began her career working alongside marginalized people at an urban ministry and coordinated an experiential learning program for elementary through college age students in the city center of Grand Rapids, MI.  From there she went on to be the Associate Pastor for children’s religious education and youth fellowship at a Presbyterian Church (U.S.A.) in Iowa, also functioning as the staff liaison to the mission committees and local Boys and Girls Club. Pamela next served as the Executive Director of a L’Arche community, an intentional community of people with and without intellectual disabilities.

Following her move to the Chicago area in 2015, Pamela fulfilled her lifelong affinity for Judaism by becoming a Jew by Choice.  Since then she has been a Shabbat Coordinator, overseen family High Holiday programming, and worked as a religious school teacher at various synagogues alongside being a nanny.

Creative endeavors such as knitting, crochet, needlepoint, and painting are all of interest to Pamela, as well as reading historical fiction and Jewish literature.  She enjoys being with her family and loves her cat. 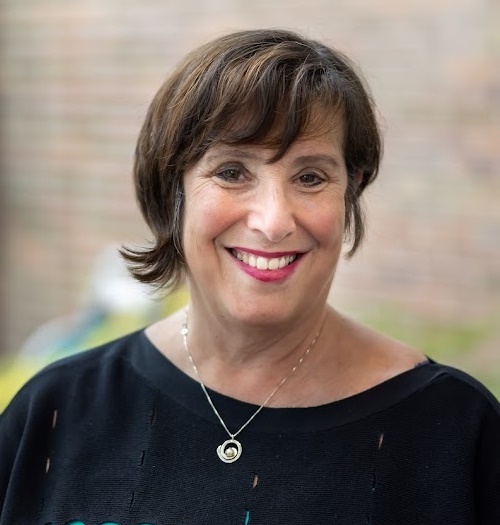 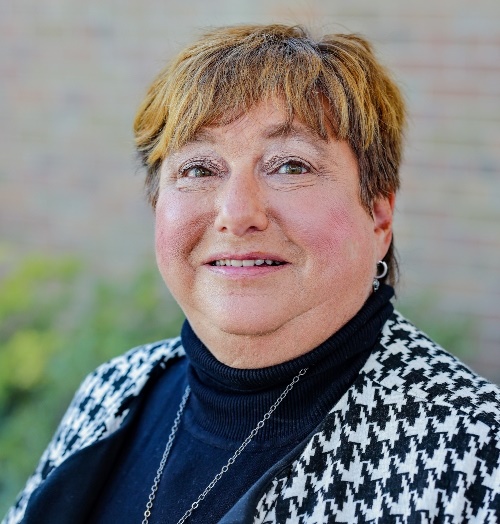 Audrey is new to Congregation Beth Shalom and supports Leann Blue and Michael Garlin in her role at CBS Membership & Programming Assistant.

Audrey was born in Chicago, and grew up in West Rodgers Park. Audrey lives in Buffalo Grove and is the mother to two children, Ron and Gabby. She loves spending her free time cruising, reading, and spending time with family and friends. Audrey is a big Cubs fan. 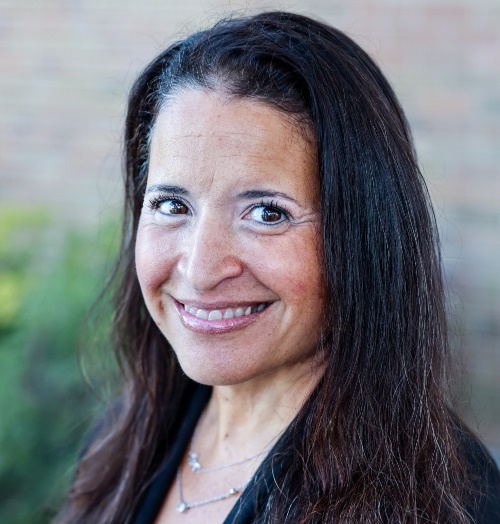 Assistant to the Clergy

Lisa was born in New York, grew up in West Bloomfield, MI, and attended college in California before moving to Illinois 30 years ago. She earned a double major in History and Communications from the University of California, San Diego.  Lisa lives in Northbrook and is the mother to twin sons that are grown and have flown. She loves spending her free time seeing theatre, watching movies, reading, traveling, and being outdoors. 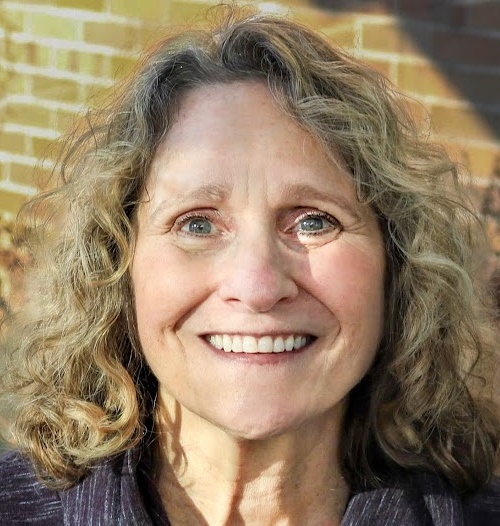 Susan grew up in Las Vegas, Nevada attending Congregation Beth Sholom with her family. While working towards receiving her undergraduate degree at UCLA Susan was a senior staff member at Camp Alonim in California and attended Brandeis Bardin Institute for adult Jewish learning where she was inspired by Dennis Prager and Rabbi Joseph Telushkin. She went on to gain her Masters in Jewish Education from the University of Judaism. Her love of the Hebrew language has found her teaching students, adolescents and adults, privately and in class settings for CBS as well as in the Chicago area.

Susan is a vibrant and cherished teacher to our Bnai Mitzvah students as well as our adult learners of all levels. 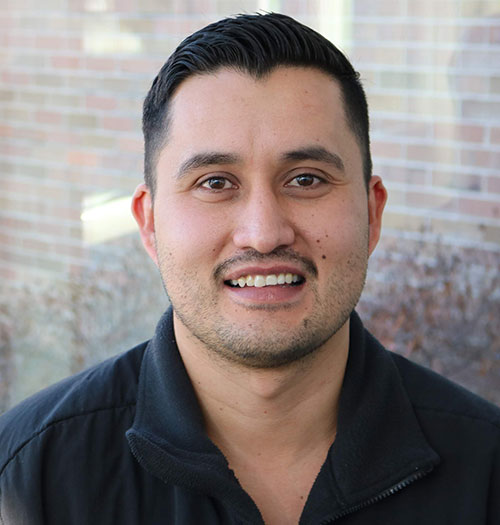